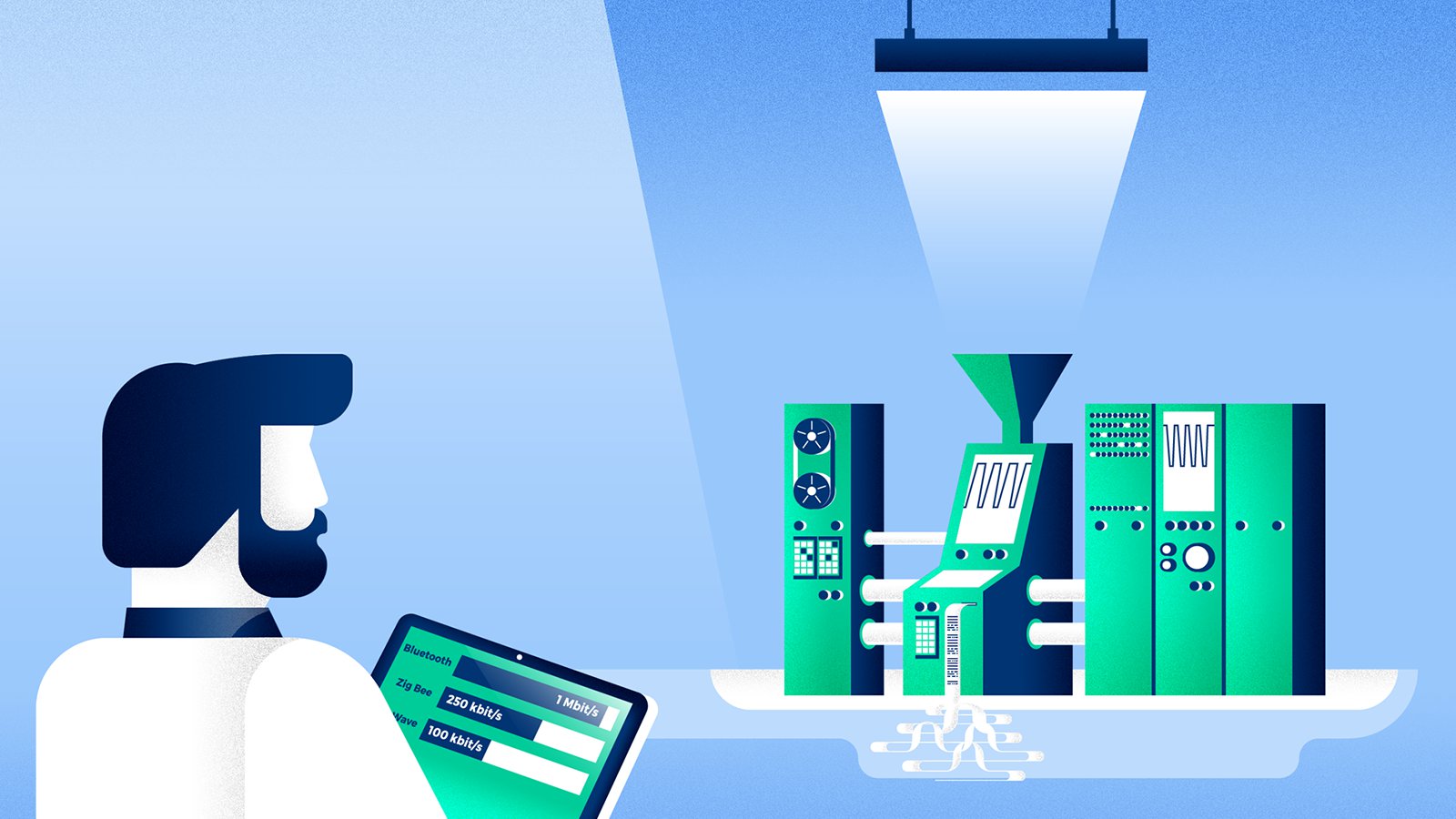 Our expectations towards connected LEDs in commercial settings have grown to epic proportions. In the IoT era, lights are supposed not only to make a number of autonomous decisions based on real-time data from a dense network of sensors, but also to deliver all kinds of new services. We expect them to form a building intelligence infrastructure, helping business owners understand customer behavior and generating all types of data improving products and processes taking places across the built environment. All of these tasks involve wireless data exchange, and the majority of cases require this data to be transferred with minimal latency. This becomes quite a challenge once you consider the scale of commercial lighting systems and limitations of the available low-power communication protocols.

Scale is the key word when talking about the reliability and robustness of commercial smart lighting systems. All of the low-bandwidth communication standards designed for the IoT can handle small installations, like the ones typically found in the residential segment. Depending on the protocol used, the overall performance of such a network may vary, just like the experience of end users interacting with it. But in general, things will work pretty much as expected.

However, once we scale it all up a bit, some of the communication protocols will start facing various kinds of problems. Commonly, these include latency issues or lost data packets. As long as network traffic remains moderate, they might be bearable. But as traffic intensifies, so do network failures. And if we scale things up even further, suddenly the entire network becomes saturated more often than not. Why does this happen? Because in a commercial lighting environment, the vast majority of wireless communication technologies are still not good enough at doing exactly what they were intended for – transmitting data wirelessly across the network. This wasn’t really the case until we started dreaming of building-wide connected lighting systems providing a multitude of services. Z-Wave or ZigBee have been routing messages over mesh networks for more than a decade, and they’ve been pretty successful in the majority of applications they were used for over that period. Commercial smart lighting is a different story, though.

The concept of our ceilings becoming information highways packed with all types of sensors and actors constantly exchanging data between each other, and pushing part of that data to the cloud for numerous benefits, is certainly a thrilling one. But instead of a highway, we have been driving a single lane full of holes and slippery mud so far. While it is true that smart lighting devices broadcast relatively simple commands (on, off, dim, etc.), state-change signals or only tiny bits of information (e.g. sensor readings), it is the scale of commercial installations that makes all the difference.

An important thing to realize is that an extensive smart lighting network with a mesh topology, which has been deployed in a commercial setting, is a living organism. It keeps buzzing and vibrating as hundreds of tiny data packets constantly travel in all directions, relayed between individual nodes and repeated a number of times to prevent packet loss. Such a network is never quiet, even when lighting conditions remain unchanged in a given space. This is particularly true for adaptive lighting systems that use sensors to drive efficiencies, and keep sending various types of data to the cloud. Individual packets may be small compared to what we got used to in the golden age of computer science, but multiply this hundreds or thousands of times and suddenly we’re talking about some really serious network traffic.

The thing is that handling heavy network traffic is not really what the available protocols were designed for. Wireless communication standards commonly used in the Internet of Things were – for good reason – designed with very specific assumptions in mind. Low energy and low bandwidth requirements are among the most important ones for the IoT, since this dramatically extends battery life and allows multiple devices to be used within a limited space. With radio being a shared medium, frequency bands are a very scarce resource. In order to accommodate many devices in a given frequency band, the requirement for them to be low bandwidth is extremely important. So there is a clear contradiction here, as we expect low-bandwidth protocols to carry quite significant data volumes across the network. Can this challenge be solved? It’s difficult but not impossible.

Achieving a satisfactory network performance within a commercial lighting network with hundreds or thousands of nodes requires minimizing the occurrence of radio packets collisions. Data packets must be small enough and need to be transmitted as quickly as possible to their destination. We’ll get back to data packets’ size later on, now let’s focus on the latter.

What influences the speed and efficiency of transmission? First off, the data rate. This one is pretty obvious. Data transfer rate is one of the crucial parameters for extensive mesh networks. The higher it is, the faster data packets reach their destination – freeing up radio waves, minimizing the occurrence of radio packet collisions, and preventing network saturation. A higher data rate means lower duty cycle, which directly translates into longer battery life. But above all, it means lower latency and better responsiveness – something that is critically important for lighting control systems. Especially in the commercial environment, latency must be kept close to none. LEDs simply *must* respond immediately to occupancy sensors’ detection of presence. And they must respond instantly to on/off/dim commands sent from wireless switches. Commercial smart lighting won’t take off unless such a seamless, no-latency communication can be provided.

In terms of data rate, there are strong differences between the leading low-power wireless communication standards. With its maximum throughput of a mere 100 kbit/s, Z-Wave is clearly the slowest protocol. All of the 802.15.4 radios, such as ZigBee or Thread, are significantly more efficient in this regard, as their maximum data rate amounts to 250 kbit/s. Leading the pack, hands down, is Bluetooth with its capability of transferring data at a rate of 1 Mbit/s. Wi-Fi does offer much more impressive throughputs but this comes at the expense of extreme power-hungriness, which is one of many reasons why it fails as an engine for wireless lighting controls. While a slimmed down version of Wi-Fi is reportedly being developed, it will take a lot of time before this new, IoT-ready flavour of the popular wireless protocol is released. Until then, Wi-Fi cannot be considered a low-bandwidth, low-power technology so we won’t be referring to it too often over the course of this series.

Back to Bluetooth, even though it’s already head and shoulders above the competition when it comes to data rate alone, it will soon gain even more edge in this regard. As announced last year by the Bluetooth Special Interest Group, and confirmed by the organization just a couple of days ago, Bluetooth’s throughput will double with the release of the upcoming Bluetooth 5 specification. With a rate of 2 Mbit/s, the responsiveness of extensive mesh networks based on Bluetooth will improve even further. Such a high throughput will also support over-the-air firmware updates for smart devices. We’ll get back to the issue of over-the-air updates in one of the next episodes, as this sensitive process is much more challenging for low-bandwidth protocols than it seems at first glance.

But the data rate is not the only factor determining whether a particular network is robust or sluggish. There are many other, less obvious features out there. Come back in a couple of days as in the second part of our blogpost on network robustness we’ll take a closer look at routing scheme, spectral efficiency, frequency hopping and many other characteristics that are very relevant for the overall efficiency of wireless communication in commercial smart lighting systems.