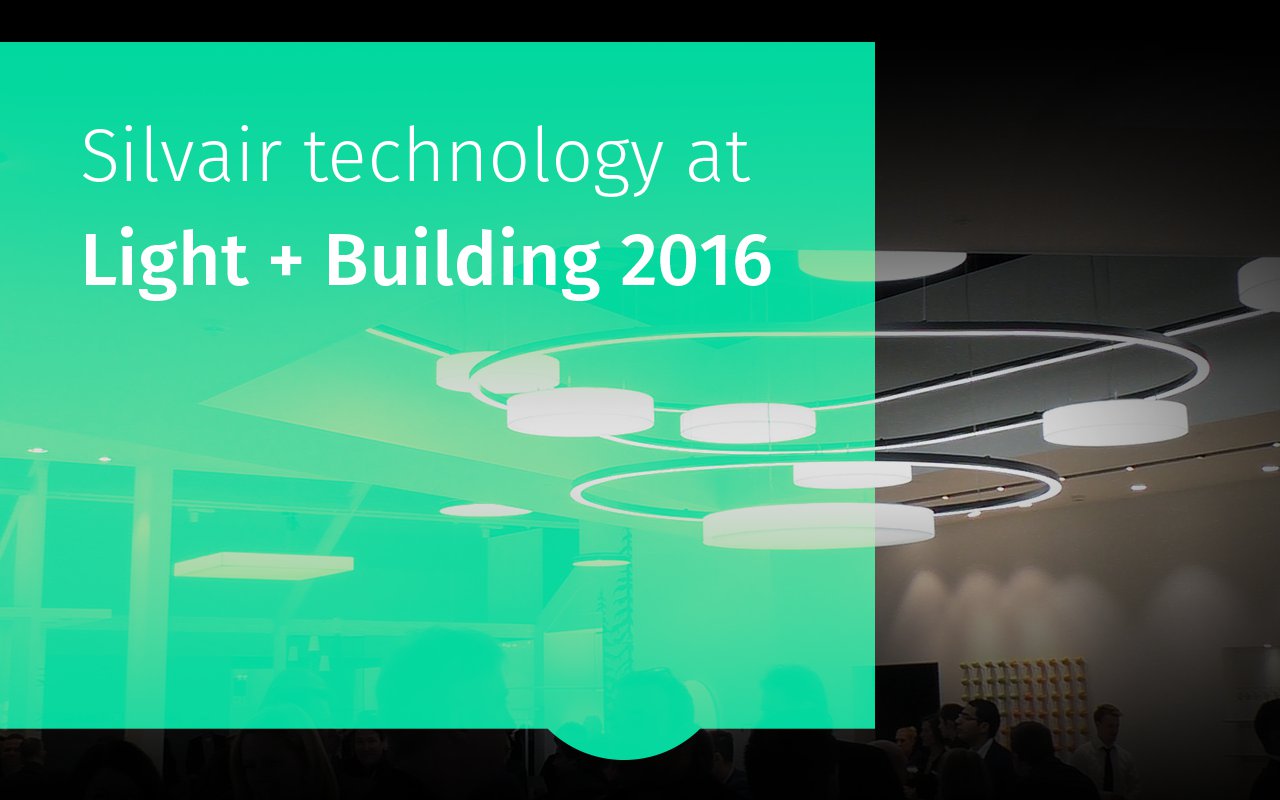 Light + Building 2016 was an amazing event, and being part of it was a great experience for us. The Silvair technology was present at several booths, each time providing a different scope of cutting-edge features and services to manufacturers of diverse lighting products. Let’s break it all down in this brief report to see what the Silvair platform is capable of.

Lighting installations with a total of 160 Silvair-enabled sensor nodes were presented at the Feilo Sylvania and LTS/Fagerhult booths. The Silvair solution enabled the adaptive, energy-efficient lighting control system designed by Organic Response to collect location-specific occupancy data, as well as LED performance data, from individual fixtures. Travelling through the robust Bluetooth-based Silvair Mesh network, all this data was captured by the Silvair Logic gateway, pushed further to the cloud, and visualized in the cloud-based Portal platform developed by Organic Response.

A pilot project of this kind is already underway at the AGL head office, an A-grade, 6-star Green Star rated building in Melbourne, Australia. Some more detailed information about that case study can be found here.

We’ve been cooperating with Girard Sudron already for some time, and L+B 2016 was the second major trade fair where France’s leading lighting company presented products featuring the Silvair technology. At CES 2016, Girard Sudron showcased smart LED retrofit bulbs controllable from battery-powered switches manufactured by NodOn which also employed the mesh connectivity solution developed by Silvair. But at L+B 2016, GS went one step further, presenting smart track lights for retail applications which feature the beacons-via-lighting capability. The unique thing about Silvair-powered connected track lights from Girard Sudron is that they allow individual control of each single light on the track. Naturally, they also offer the standard set of Silvair wireless control features.

Zamel and Aquaform were among the new partnerships announced by Silvair during L+B 2016. Poland’s premier lighting companies presented their smart solutions based on the Silvair technology at a joint booth which featured i.a. smart switches and smart LED drivers. The highlight of the booth was a tunable-white LED fixture. Trade fair visitors could adjust its color temperature not only from a smartphone app, but also from a wireless, battery-powered wall switch. At the booth, Silvair demonstrated also some value-added services that can be delivered via connected luminaires with the beacon functionality enabled by Bluetooth®. In cooperation with Zamel and Aquaform, we will soon be deploying cutting edge beacon-via-lighting infrastructure at one of the top museums in Kraków, Poland.

The best part about our partnership with Zamel and Aquaform is that we entered into cooperation just two weeks ahead of L+B 2016. This is how much time we had to integrate the Silvair technology with their products, build reliable prototypes, and test them inside out so that they could be showcased at the event. And we did it all, showing just how quickly lighting companies can build connected products with our help. This is what we call empowering manufacturers.